The Board of Commissioners honors Robert H. Morrow as the first recipient of the Outstanding Alumnus Award

Over our long history, many graduates have demonstrated outstanding traits of service, excellence in careers, and continued partnerships with the school. The SCSDB Board of Commissioners has created an award to honor an outstanding alumnus. The Board is proud to announce that the first recipient of the Outstanding Alumnus Award is Robert H. Morrow.

Mr. Morrow came to SCSDB in the 7th grade and studied here through the 10th grade. He then transferred to Gallaudet University for a college preparatory program. He remained at Gallaudet where he earned an undergraduate degree in Physical Education, followed by a master’s degree in Deaf Education from Western Maryland University. He began teaching and coaching at SCSDB in the fall of 1971 where he later became the athletic director for 7 years. Over his 34-year career, Mr. Morrow taught football, basketball, volleyball, and track.

Among many other merits, he established the first summer camp for the deaf at SCSDB for students across the state. After retirement, he volunteered at SCSDB to help with sporting events, the Lions Club Christmas programs, and the Halter program on campus. In 2011 he became a member of the SCSDB Board of Commissioners representing the deaf community.

Mr. Morrow willingly and selflessly served on the board for over a decade. As an avid community leader, Mr. Morrow has done much to aid the deaf community. As a member of the South Eastern Athletic Association of the Deaf, he has served as vice president, leader, delegate, and coach, as well as being named a member of the hall of fame. Additionally, he established the SC Bass Anglers of the Deaf where he would organize fishing tournaments up to eight times a year across the state for deaf anglers.

Mr. Morrow has proven to be a true patriot of SCSDB in various capacities for over 50 years. Mr. Morrow has led an amazing career dedicating himself to this school and the deaf community. He has steered, coached, educated, and mentored. For all of these reasons, this award was first given to Robert H. Morrow, but also this award itself will be named the Robert H. Morrow Outstanding Alumnus Award.

Congratulations Mr. Morrow, and thank you for all you have contributed to our school. 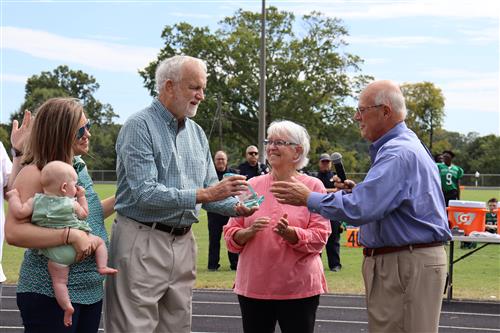